We love pho anytime, but it's especially good when it's cold outside. It's warming, while also being pretty light. If it seems impossible that you could make really, really good pho in a slow cooker, then I challenge you to try this. The key to any pho is the broth, and the best pho places will simmer it at least overnight - there are rumors that some don’t ever change the base and just keep adding to it. The best part of this version is that you can throw everything into the crockpot after a little prep time in the morning, then come home and finish it up for service. The hacks are broiling the onions and ginger first, using dried shiitakes, kombu, and fish sauce for extra umami, bone broth for depth (don't skimp here and use stock instead), and infusing the broth with aromatics and meatiness. You can make beef or chicken, your choice! 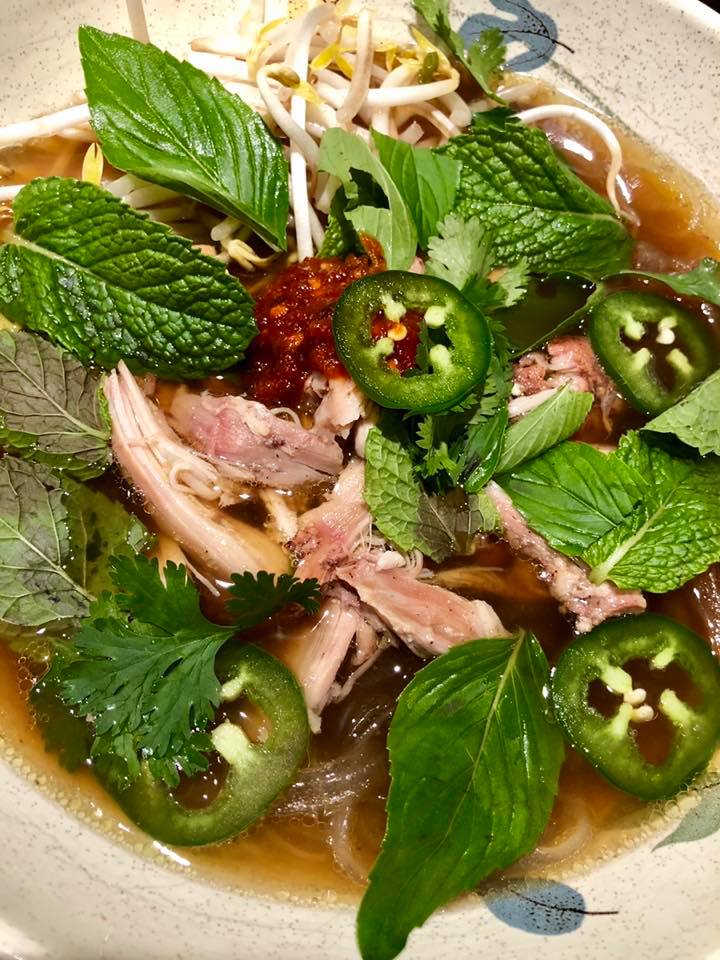 * Fancy making vegetarian pho? Replace the bone broth with mushroom stock and double the dried shiitakes. Let the broth simmer for 4 hours as written, strain, and season with soy sauce (or tamari or coconut aminos) and a touch of miso (for that fermented funk). Grill 4-6 large portabella mushrooms, slice them, and add them to the bowl with the cooked noodles. Pour on the broth, serve with the garnishes.

** I accidentally grabbed mung bean noodles one time at the Asian grocery when I was making this dish. It was a happy accident! Mung bean noodles retain a fantastic chew when cooked and when sitting in the broth. While not at all traditional, they’re a nice change.

Hello, friends. I'm a foodie. My cookbook is the compendium of my recipes gathered up over the past 25+ years - the result of my part-time grub affair. With the sharing of these recipes, my hope is that I am handing you a starting point for some memorable meals. And, perhaps either creating a spark or fanning a flame. I have put a LOT of time and effort into each and every one of them. You will travel all over the US and world with the recipes in this cookbook, and my sincere hope is that you enjoy the heck out of cooking these!

All profits from the sale of my cookbook, Part Thyme Grub Affair, will be donated to AWARE (www.awaredallas.org). AWARE provides funding and support to outstanding local groups that offer services, programs, education, and resources to those suffering from Alzheimer's disease, their families and caregivers, and to organizations doing valuable research to find a prevention and cure. If you'd like to purchase a copy, you can do so here: https://createmycookbook.com/products/266878_280161_R.

Want us to feature your recipe on our blog and social media platforms? Click here!

Next: Recipe of the Week | Onion BBQ Meatballs
Create Your Own Cookbook