The Importance of Handwritten Recipes

Jennifer Osborn, mom, wife, yogi, cookie baker and cocktail shaker, is also an award-winning newspaper reporter and photographer. She documents her kitchen activities at kitchenserf.com. She’d love for you to reach out on Facebook. Or send her your own recipe stories: jennifer@kitchenserf.com.

I’m failing my future grandchildren and their bellies.

I realized this recently when I inherited my late grandmother’s recipe boxes.

Glancing at an index card with a recipe written in her graceful, loping script transports me back in time.

Even though it’s been 25 years since she died, that recipe card helps me go back to her kitchen. I see her standing at the stove, spatula in hand, clad in jeans or slacks, barefoot with toenails painted beige, a bouffant hairdo carefully in place, head tilted while she’s listening to me talk. 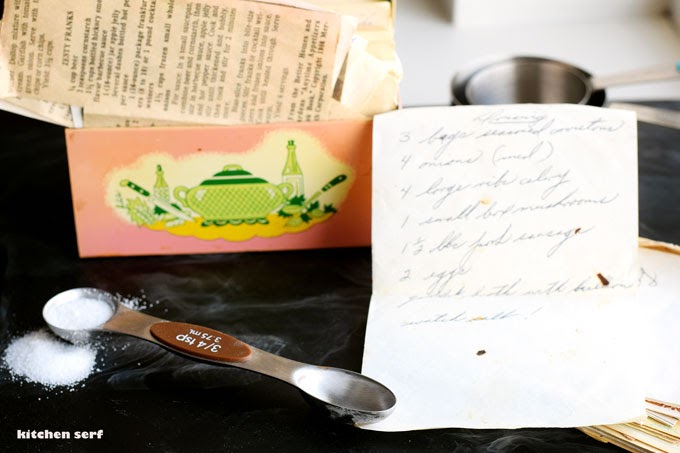 Meanwhile, at 50, just 15 years younger than my grandma was when she died, I have no organized recipe system. In fact, I can’t remember the last time I actually wrote down a recipe other than scribbling a few notes while testing a new dish.

I’ve got recipes on my iPhone, clustered in the notes app, recipes in multiple inboxes and screenshots from websites in my photo app. But, this technology isn’t going to work forever. Handwriting, that’s forever. Well, as long as it’s on archival, acid-free paper :)

There are recipes from magazines and newspapers that I’ve taken photos of with my phone.

I’ve got recipes saved on the hard drive and desktop of my work computer (shhh, don’t tell.) Still, more recipes are on my laptop and yet more float around on Google Drive.

Then there are the clippings.

Really, there’s no other way to characterize my recipe life other than a Big. Fat. Mess.

Inheriting these boxes have made me think about my son and all the meals he would miss if something happened to me before I write down how to make everything that he loves.

I imagine my son as an adult in front of a stove trying to recreate my dishes. What kind of ground pepper did she use in the Mexican rice? Was it ancho or chipotle? Did she use cumin or coriander? Or was it both?

Would he remember that when I use paprika in a dish, nine times out of ten, I’m using smoked paprika not sweet?

I’ve been forming a list in my head (a dangerous, unreliable place!) of all the recipes I need to write down.

If I don’t, my son won’t know how to make the pizza dough we’ve been eating for years or the recipe for the granola that’s become a weekend staple. He won’t know the secret to his favorite gingersnaps.

Sure one of my son’s most favorite dishes, garlic lime chicken, is on my website but that only exists if someone remembers to pay the hosting bill. 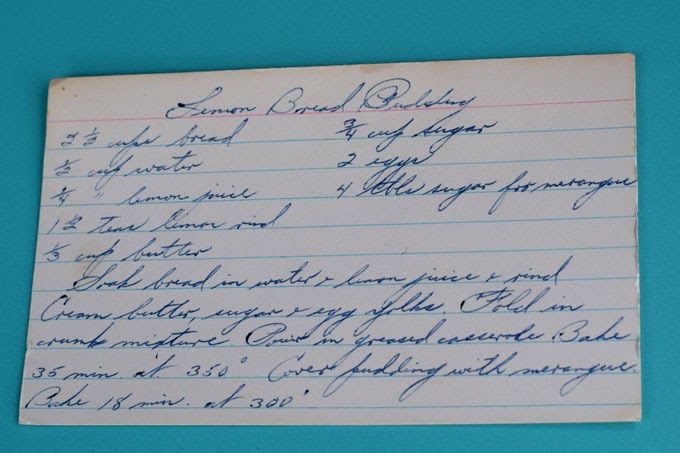 I did have a recipe box once. I had a blue plastic box as a new bride some 20 years ago. But, I’m not sure when I saw it last. Did it get packed during our last move? Is it still in a box in our barn waiting to be unpacked?

I could push away my lack of system into the deep recesses of my brain until I inherited my grandmother’s recipe boxes. Seeing her carefully organized boxes has infused me with Recipe Shame.

I have some recipe writing to do. When I do, I think I will order a nifty box I saw on Amazon that has a lid with a groove to hold my phone upright while I’m in the kitchen.

It's time to get serious.

Do you know how much butter and sugar and flour I smear on my phone? Probably enough to bake a couple of cakes. Definitely enough to make the Cake You Won’t Stop Eating.

I spent a fair amount of time with my grandma in the kitchen when I was a kid. But, I was just starting to really cook and ask her for recipes not long before she died.

I’m so thankful for her recipe boxes and all the treasures and oddities I’m unearthing within those small tin walls.

The boxes, of course, besides recipes written in grandma’s loping signature, include newspaper clippings. She’s scribbled notes on some.

A recipe for coconut cake from the St. Louis Post Dispatch has “cake good,” scribbled in the top right corner. She’s drawn an X over the frosting recipe below it.

So, the cake is good grandma, but do I serve it unfrosted? Find another frosting recipe? What was so offensive about the frosting recipe that led you to X it out?

Not all of the recipes have been written on index cards.

One of the boxes includes a recipe for red beans and rice that Grandma jotted on the back of a bank deposit slip. I’m thinking that recipe must be excellent. She was somewhere eating these red beans and rice and they were so amazing she had to get the recipe right then and there. This was long before smartphones so she grabbed what she had in her purse and got to recording. 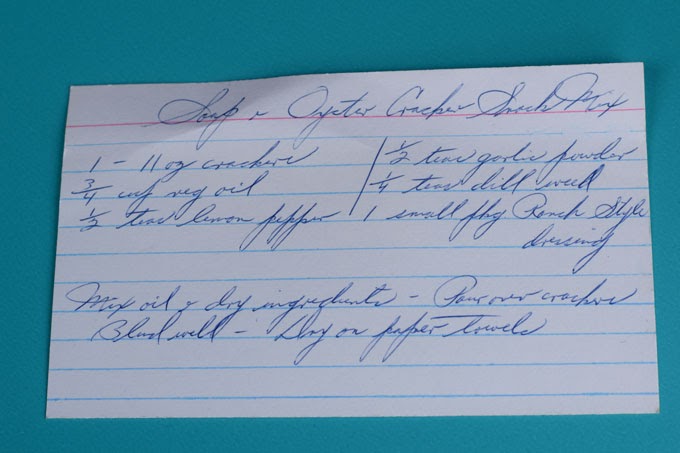 Those recipe boxes answered some questions I didn’t know I had.

Grandma would make little smokies in a sauce as a holiday appetizer. I thought they were just little smokies in barbecue sauce, which I’ve made myself many times. But, they never tasted as good as I remembered. Now I’ve found her recipe and I realize she added many more ingredients to her dish, including a half can of beer. That’s the magic right there.

There’s a recipe for broccoli casserole I remember fondly, from grandma’s sister’s daughter whose name I hadn’t seen in a long time.

There’s another handwritten recipe from someone named Aunt Essie. I don’t ever remember hearing about an Essie. The only Essie I know makes a mean bottle of nail polish.

Now that I’ve inherited my grandmother’s recipe boxes, I have no excuses.

She left a stack of blank index cards in the back of one box.

Next: The Perfect Family Reunion Cookbook
Create Your Own Cookbook